To use AR, run game using a separate AR link. 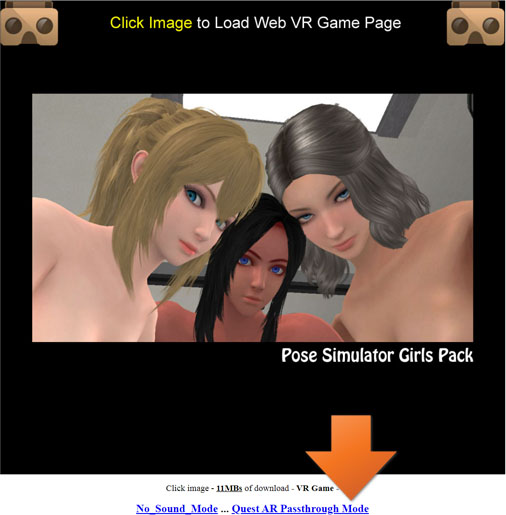 My impressions about Quest AR.

Honestly, I’m not impressed at all.  The problem’s not the color. I won’t get Quest pro for the color passthrough.

The lack of depth kills realism.

Shadow plays a very important role about realism in 3D.

In the smartphone AR Standing Girl, I used to draw fake shadows on the ground. It was okay because the girl was always standing on the ground.

But in this case, I’ve decided against it. Because users are going to put the girl on top of something most of the time, shadows will never match. It’ll only kill what’s left of its realism.

Its usefulness is going to vary among people. I suggest you make your own judgments.

Don’t worry about privacy because your homes won’t be visible in the screenshots.

It does feel experimental, but when you finally get to align a girl correctly, mixed reality kicks in and you feel completely inmersed as if the girl is right besides you at your own house. There are other uses for AR passthrough, I found it fun to scale everything so the girl would be some sort of “desk maid”.

Keep up the great experiences, you’ve been acomplished marvels!

the AR is great, youve been doing a really amazing job cranking this out so fast. I think the AR is working well, but i have had a few issues. sometimes when focused on one model, the unfocused models will start jumping around and changing position. A lot of the times when this happens the affected models also stop responding to “play” mode. Another issue Ive had is that when on hand tracking the only interaction that seems to work is pushing them around during placement. just thought I’d let you know about those issues. im fine with hands the way they are. ONE REQUEST! can you give Succubus her clothes back. i dig that skirt and sleeves! thank you

I’ll recover Succubus’ sleeves soon. Skirt is problematic. I have to create a method to edit the skirt in detail,  otherwise it’ll become a total mess overlapping with the legs.

I’m thinking of a super creative editing method to edit hair and skirts that no one has seen before. 😀

The most disturbing part for me is the hand, because the virtual hand and actual hand can never match perfectly.

What if I draw very large virtual hands, and completely cover my actual hands? Would that help?

Let’s discuss after you guys try this actually.

any chance you could disable the camera reset that occurs when selecting Play? The model moves postion and you have to readjust each time.

I’ll remove the forced camera reset on the next update.

The position is calculate by a very simple formula. Most of the time it moves to a very bad position.

Im usi g duet 1 and have not had any luck withhand tracking being able to select body parts to move, only controllers work. Not a problem for traditional interactive use, just moving models.

Using Hand tracking for editing was never implememted.. It should be possible to grab limbs by clenching gesture. It’d be very noisy, inaccurate.

I’ll take care of this when other things are almost done.

Pretty amazing I have to say! I’m on the Quest 2, Quest browser. I wasn’t sure if I’d have to enable pass through manually but it appears to be triggered just fine.

The smaller, slightly misaligned hands don’t really bother me. Perhaps because everything is grainy and a bit off anyway in black and white. It might be a different experience on the Pro or other systems in color but I think it’s fine. Having larger hands might be even stranger than the minor alignment issue.

I also have to say that the lack of shadows isn’t really bothersome to me either, given the overall pass thru environment.

I love the fact that the model extends and renders past the guardian boundary and you can manipulate and even see a faded version of the model at a certain point past the guardian. I do have to say that not being able to see into the standard boundary area from outside is a little problematic if you set up certain “action scenes” but maybe that’s just a Quest limitation.

A workaround may be to use the Experimental Mixed Reality feature to define furniture or other areas that could extend the working area or just draw the boundary farther I guess. For example, if a model is leaning outside the boundary onto furniture and you want to interact in play mode. On a side note, I actually had to wipe those setting the other day because the firmware update totally borked my ability to draw a guardian and get into the main UI. It kept trying to find a previous boundary until I just sat down and setup using stationary mode then switched later. 🙁

I guess you might use Dev mode to turn off the guardian altogether. I don’t have a Dev account so I don’t know if that would solve the problem. I know not everyone is on the Quest so those comments are only for that platform.

More problematically, I did notice that when you have two characters, switching between the them causes the other model to jump to a different position, seemingly at random and vice versa. The makes it very difficult to set up a scene. This happens regardless of whether a scene has one model outside the boundary or all of them inside the boundary so I don’t think it’s related to that. This happens in both 34 and Girls.

Anyways, all in all, this presents some interesting possibilities! I think someone posted a “free roam” in Reddit and this might allow you to extend the play area from room to room. https://www.reddit.com/r/OculusQuest/comments/10eiu21/multifloor_passthrough_works_for_quest_2_and/

Tough to share obviously but good for individual customization.

Any forced movement made inside the game will break alignment in AR.  I’ll disable that feature in the next update.

As I recall, to turn off the guardian, it doesn’t require registering a developer account. Quest App can turn on the developer mode, and it enables guardian off.

I think turning off guardian is a requirement to use AR effectively.

I’m going to have to upgrade from my Quest 1, I’ve been hoping you’d tackle AR / Pass Through… Quick Follow up, I just reg’d with the Store.